Will Future Hoya Teams be Truer to Princeton Principles?

Certainly the disappointing loss to Davidson will take some time to get over. And much criticism will continue to be leveled at the officiating crew in Raleigh. 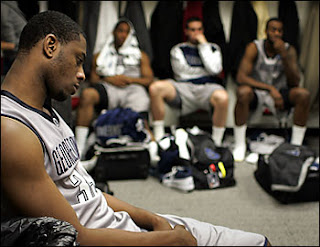 Yet one of the shortcomings the team experienced yesterday, was one which featured all season long: an inability to make entry passes into the post.

Far too often this season Hibbert would get great position down low only to be overlooked by the guards. Or they would see him posting, but did not have the confidence to make a safe entry pass.

Watching the other teams in the tournament, it was hard not to marvel at how often centers like Stanford's Brook Lopez received the ball in a position on the court where all they had to do was turn and shoot a gimme.

Our guards have not done this often enough for Hibbert during his time as a Hoya. But should this be surprising? JT3 played and coached in the Princeton system where there are no post players. In the Princeton, centers play on the perimeter to open up the lane for the cutters. There isn't a need for an entry pass. It's entirely possible that JT3 never had to learn that skill as a college guard and hasn't been able to pass it on to his players.

This year, in particular, Georgetown seemed uncomfortable in an offense that balanced post play with three point shooting. At some point in the season, our back door cutting almost evaporated. While the absence of back door cuts may be attributable to the zone defense we often faced against Big East teams, in our two NCAA games we faced man-to-man.

Against Davidson, the refs were calling fouls when their defense grabbed at our players making back cuts. This was an ideal officiating environment for our Princeton offense to flourish. Belmont and West Virginia ran more back cuts against Duke then we did in the whole tournament.

Look for the Princeton offense to return to prominence next year. JT3 never recruited Roy, and while the big guy has been a huge asset for the coach, he's an anomaly in the Princeton.

Macklin, Monroe and Sims are mobile front court players and may not spend much time in the post. Braswell is a guy that rebounds and can score off of putbacks.

With the roster now full of JT3 recruits, the coach no longer has to balance different styles of play. It may very well be that the Hoyas develop a consistent offense next year more fully committed to the Princeton offense.